Impact of Technology in Covid 19: The Role of Big Data, AI and Other Tools in the Fight Against Coronavirus

The coronavirus outbreak is the current common cause for concern world over. While many have recovered from COVID-19, many lives have also been lost, given that, possible vaccines are still on clinical trial at the moment. As health professionals and government administrations brainstorm and pour efforts into eradicating the disease, here is a look at how technology is playing a pivotal part in the process. 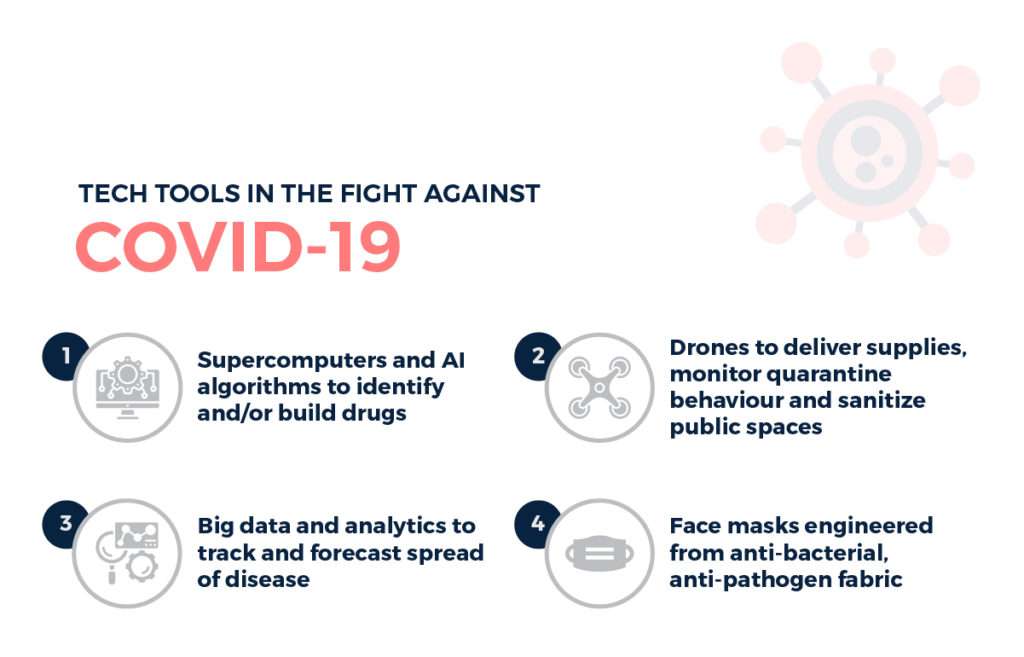 The coronavirus outbreak is the current common cause for concern world over. While many have recovered from COVID-19, many lives have also been lost, given that, possible vaccines are still on clinical trial at the moment. As health professionals and government administrations brainstorm and pour efforts into eradicating the disease, here is a look at the impact of technology in the fight against the Covid 19 pandemic.

When the COVID-19 virus started spreading in Wuhan, China, countries world over, especially China’s neighbouring lands were warned to be ready and brace for impact. The one country that was expected to be the second most affected, given its geographical proximity and trade relations with Wuhan, was Taiwan. However, the Taiwanese administration wasted no time in springing into action, and the number of cases that did arise in the country, were significantly lesser than initial projections.

Experts argue that one of the big reasons behind Taiwan’s reduced impact, was its usage of technology in the fight against the pandemic. The Journal of the American Medical Association (JAMA) notes that Taiwan tracked possible carriers and initial cases of infections using big data analytics and cell phone tracking. So much so, that when news of a possible outbreak came out, passengers traveling to Taiwan from Wuhan had a medical check-up even before they deplaned! The administration then used geographical tracking, travel records and more data to identify those likely to have been affected by the virus and had them quarantined. They also employed cell phone tracking to identify anyone who was flouting the rules.

Taiwan notably set up National Health Command Center (NHCC) after the severe acute respiratory syndrome (SARS) epidemic in 2003, to ensure that if ever such an outbreak were to come about in the future, they would be prepared to tackle it. In the current COVID-19 outbreak, their specialised technical teams closely monitored the citizens affected by the virus and ensured that those at risk were quarantined. The JAMA article observed, “Taiwan leveraged its national health insurance database and integrated it with its immigration and customs database to begin the creation of big data for analytics; it generated real-time alerts during a clinical visit based on travel history and clinical symptoms to aid case identification. It also used new technology, including QR code scanning and online reporting of travel history and health symptoms to classify travellers’ infectious risks based on flight origin and travel history in the past 14 days.”[1]

Chronologically, the impact of technology in fighting epidemics dates back in 1854 cholera outbreak in London. Data analysis was done through data journalism and mapping the spread of a pandemic to identify the primary area of the spreading. A researcher called John Snow used data journalism and mapped the area to narrow the outbreak to one particular well which contained contaminated water. Mapping the spread of the virus and identifying the frequency with which the affected victims visited the well, Snow concluded it to be an epicentre of the outbreak. While he reportedly had trouble convincing his peers to back his hypothesis and take action, his efforts are considered one among the earliest recorded instances of using data available to curb the spreading of an outbreak in the nascent stages.

Geo-tagging and mapping have come a long way since the 19th century, thanks to readily available mobile applications, travel records, etc., and even today tracing the geographical spread remains one of the most pivotal procedures of tracking down a pandemic. 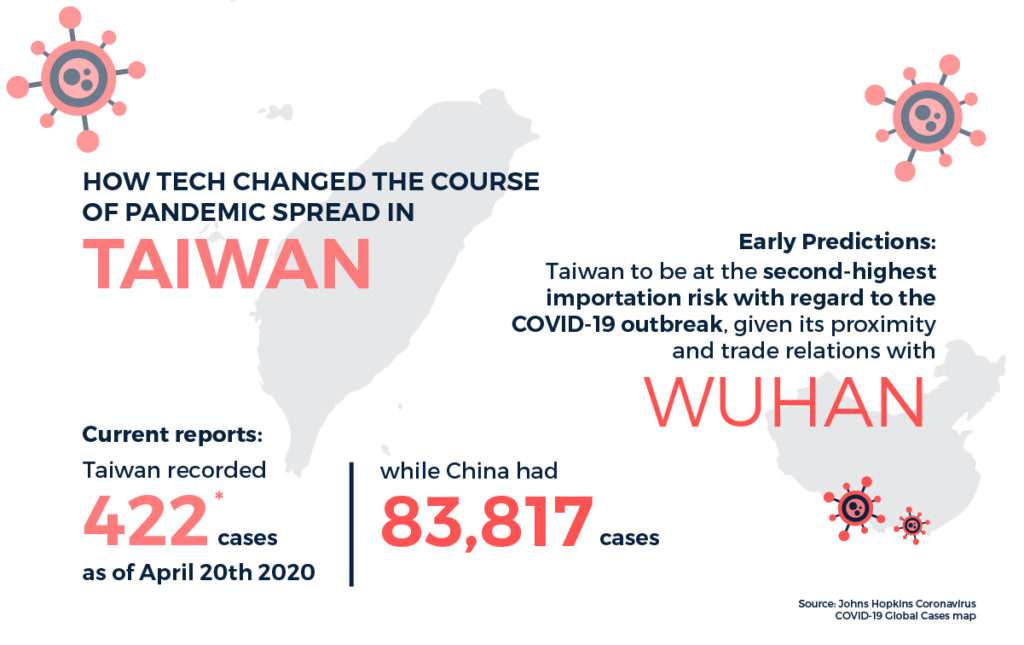 Supercomputers and drones prove important allies during a pandemic

Much like Taiwan, other countries world over, have also witnessed the impact of technology in the Covid 19 pandemic. Artificial Intelligence (AI), data and analytics were experimented with, to forecast the future spreading of the virus and decipher the possible outcomes. Many administrations and organizations are also using tech in multiple ways to provide health professionals a head start in putting a stopper to the outbreak. According to an article published on the Forbes website[2] last month, an AI service provided by a Canadian start-up tracked and predicted the spread of the virus by collating data from news reports, social media and government data.

Other companies also came up with AI diagnosis systems to accurately diagnose the virus within seconds. Supercomputers and AI algorithms are also helping identify and/or build drugs and come up with vaccines for the outbreak. A company in Israel is reportedly experimenting with tech to help create face masks made up of anti-bacterial, anti-pathogen fabric. Drones are being used in many countries to deliver medical supplies, keep an eye on citizens who might not be complying to quarantine mandates, and even thermal imaging to detect the presence of the virus. The World Economic Forum[3] also shared that China used drones to aerially disinfect public spaces and vehicles to contain the virus outbreak. “One technology trend that is gaining mass adoption at an incredibly fast pace is contact tracing systems,” reports Analytics India Magazine[4], citing the example of India’s Aarogya Setu application. The application “needs an active Bluetooth connection to decide whether you have been inside six feet from the infected individual. Guaranteeing the data is encrypted, the application utilizes your location to know about the zone you around go under the contaminated hotspots using a social graph and data analytics,” notes the article. Similarly, South Korea, reportedly has an app called Corona 100m that maps location of COVID-19 patients within a 100 metre radius.

Quest of public health security a threat to data privacy?

The various technological measures adapted by government agencies and medical institutions do come with their fair share of limitations and in certain cases, might even pose a threat to privacy. For instance, data mapping like John Snow in the 1850s, might not be as easy to work on in the 21st century. Writer Simon Rogers[5] notes, “in the event of an outbreak like this now, it’s inconceivable that the government would publish the data on grounds of privacy; that the victims’ addresses were personal data.” Location data, therefore, understandably has its own issues of privacy given that it can help identify citizens and track their every move. Writer Bernard Marr observed that as of April 9th 2020[6], “in the United States, the government [was] in conversation with tech giants such as Facebook, Google, and others to determine what’s possible—and ethical—in terms of using location data from Americans’ smartphones to track movements and understand patterns”.

In a bid to realize the impact of technology in the Covid 19 pandemic, early on in March, the BBC reported[7] how the Israeli government approved the move to track the mobile data of people suspected to have been infected by the virus. The article notes, “The head of the justice system said the move would save lives, while Israel’s prime minister said it struck a balance between public-health needs and civil rights. Israel is still in the relatively early stages of the pandemic – and many ordinary Israelis are used to complying with measures they see as important for their security. But this is a public health threat, not a security one. The ultimate test of bolstering the powers of surveillance agencies will lie in their longer term effectiveness: whether they can slow the spread of the coronavirus.” Reporter Tova Cohen [8] also noted how many Israelis voluntarily downloaded a coronavirus monitoring application, but not all of the population had downloaded the app and the government deemed it a necessary move when people are allowed to get back to work, in order to help track the outbreak. Therefore, this proved that while a voluntary data collection better protects individual privacy, in the larger sense, it hinders the collection of holistic data and the results reflect only the effect of the pandemic on one section of society – the one that has downloaded the application.

An alternative perhaps can be the way in which Italy, Germany and Austria are dealing with the scenario by collecting data from mobile carriers to monitor if citizens are complying with the restrictions on movement, but still adhering to Europe’s privacy laws. Reuters reports[9], “The data, which are anonymous and aggregated, make it possible to map concentrations and movements of customers in ‘hot zones’ where COVID-19 has taken hold.

That is less invasive than the approach taken by countries like China, Taiwan and South Korea, which use smartphone location readings to trace the contacts of individuals who have tested positive or to enforce quarantine orders.”

Administrations, health professionals, civil rights activists, data scientists, analytics professionals are trying to figure out the best possible way to harness the impact of technology to improve public health, in the time of a pandemic, without hindering the fundamental rights of people. Here’s where we reconsider Taiwan. As noted by the JAMA publication (cited earlier) “Based on a poll of 1079 randomly selected people conducted by the Taiwan Public Opinion Foundation on February 17 and 18, the minister of health and welfare received approval ratings of more than 80% for his handling of the crisis, and the president and the premier received an overall approval rating of close to 70%,” proving that in a time of crisis, the public comply when they believe that their data is being used in their best interests and not for any hidden agenda. As of April 20th 2020, according to the Johns Hopkins Coronavirus COVID-19 Global Cases map[10], China had 83,817 reported cases, whereas Taiwan reportedly has 422*. These numbers become significant when one considers that the initial prediction placed Taiwan at the second-highest importation risk, given its geographical proximity and trade relations with Wuhan.

Using big data analytics, current technology and proactive measures, many countries world over, have exhibited, so far, that technology can prove a valuable ally in the fight against a pandemic and support the efforts of medical professionals and government administrators. As these multifarious entities join hands (only metaphorically, of course – please practice social distancing till the virus is gone for good) and battle the pandemic, the collaborative experience will prepare us to tackle future outbreaks with improved agility and efficiency.

This too shall pass. 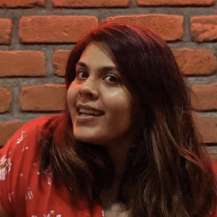 On any given day, Tanvi is likely to be thinking about when she gets to eat pasta and mashed potatoes next. In her downtime, she can be found collecting unique postcards at bookstores, jamming to music, re-watching series/movies, or pondering over human existence. 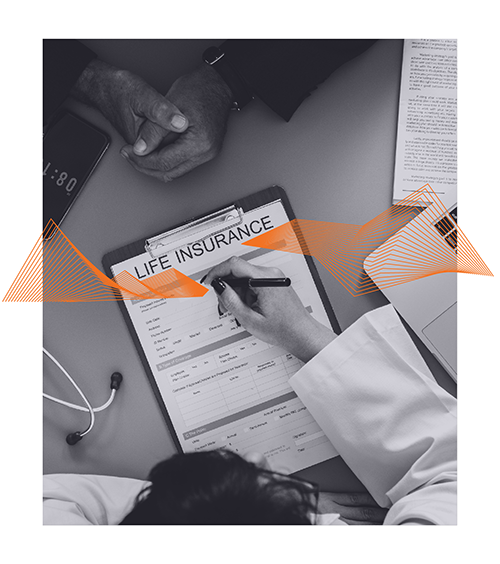 Data to the Rescue as the Insurance Industry Grapples with the Impact of COVID-19? 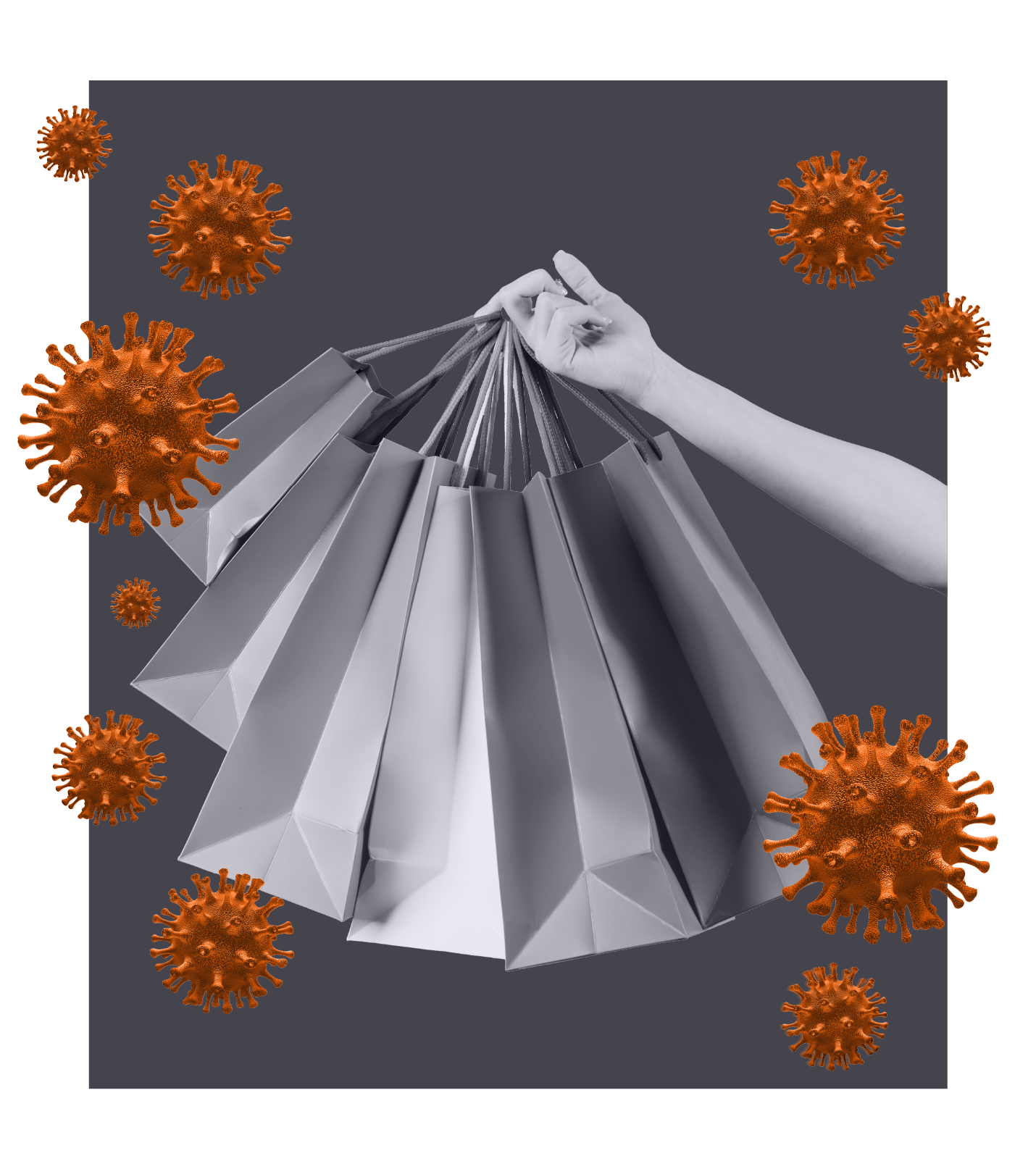 Will the Impact of COVID-19, Usher in the Reign of Frictionless Retail?